There is something terribly important about the play, Marvin’s Room. It resonates for so many people who are responsible for care taking an elder or someone with chronic or traumatic illness. It is a conversation that needs to take place, and unfortunately, one that is rare.

Marvin’s Room has been produced Off-Broadway and in regional theatres, and was made into a movie, but never had a Broadway run until now. Produced by the Roundabout Theatre Company, it plays until August 27.

Written by Scott McPherson and set in Florida in in the early 90’s, Marvin’s Room bravely opens the door to the conversation about care taking, the ramifications it has on a family, and the life changing experiences for family members that ensue. Two sisters come back together when the situation surrounding their bedridden father changes.  One dutiful sister, Bessie (Lili Taylor) has done everything for him, while the other sister, Lee (Janeane Garofalo) breezes in, having had minimal involvement for so many years. Ruth, their nutty aunt (Celia Weston), is there to help, but needs more help herself.

When Bessie, the sister who has been care taking for twenty years is diagnosed with leukemia, she calls upon Lee and her sons to be tested for a bone marrow match. The story unfolds as this family awkwardly all get together during a scary and challenging time. Marvin, the father, is off behind a glass door where he is tended to. 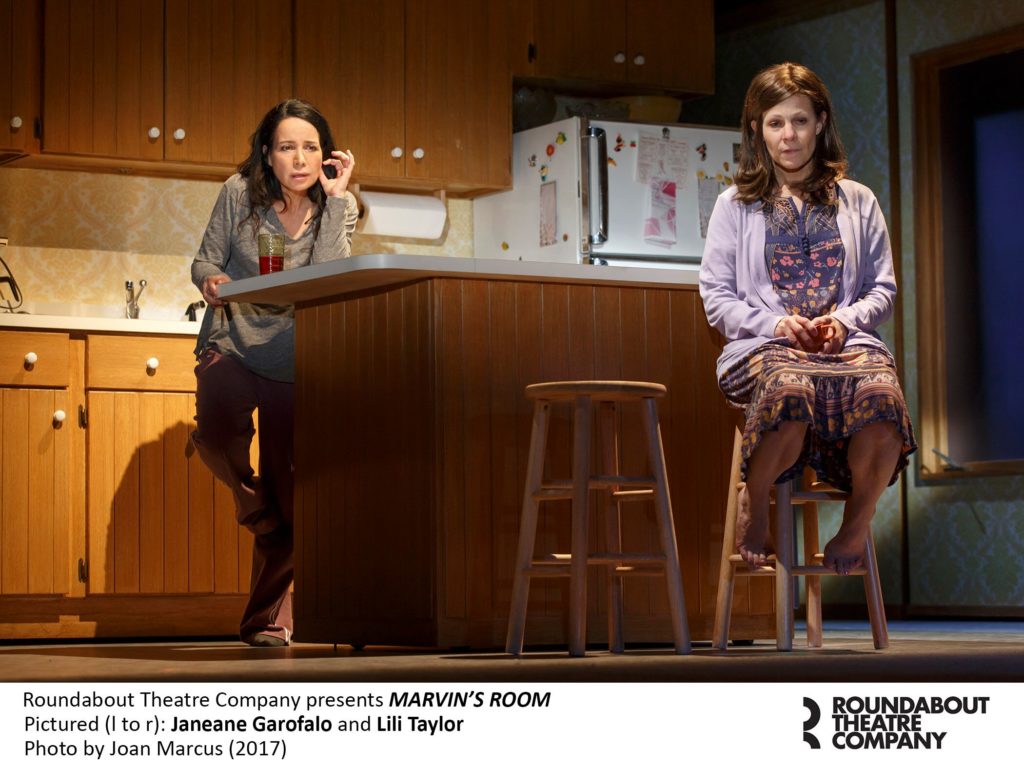 But Marvin’s Room is really not about Marvin; it’s about the dynamics of his loved ones in this all too common story.This is a tale about a family that has been shredded by the debilitating illness of the father, and the opposing lifestyles and commitments of the two daughters.

The fabric of this play is really good, as are the lines. However, what I felt was lacking was the delivery. Lili Taylor played the kind and soft Bessie so understated and so “sotto voce” it was sometimes hard to hear her. Janeane Garofalo was strong and big in her delivery, and Celia Weston seemed off.

Marvin’s Room, directed by Anne Kauffman, is a black comedy and I would have appreciated some deep, wicked belly laughs, (which can be so terribly healing)  but that never occurred. Yes, it is poignant, and moving, but the dark comedy of this piece was so under the radar, it felt like it was never really explored.