Travel Advice: What You Can Learn from the Paris Riots 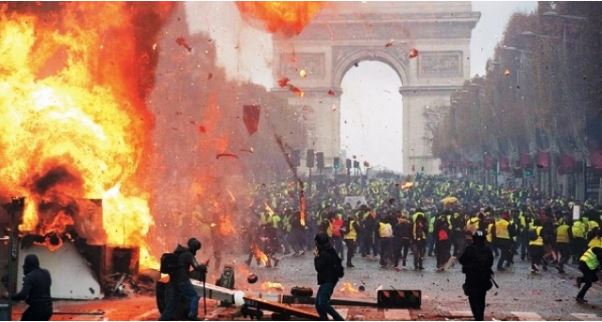 One of my favorite women travel writers is Dervla Muphy who ventured all over the world solo then with her baby. She always said if you feel endangered, go stand with women and children. Sounds good, but what if the women and children are also running as a mob and you are caught in the mess?

Yes, I was in a dangerous riot along with a member of our group.  Here is what happened. Below is the description of what we learned.

We followed a crowd along a main street, thinking there must be a special event ahead of us. We ended up in a large colonial square, empty except for a line of people. We quickly noticed that the line was moving forward. It took a moment before we realized there was a second line of armed police. The crowd around us started running. We were pushed along by the crowd. We instinctively hugged each other, so as not to fall. The rush got faster.  We tried standing against the facade of a building; we were still in danger. 3 young men told us to go into a building with them. We had no choice and went. They turned out to be nice teenagers who then suggested we move up to the second floor landing. We did.

Others then took shelter in the building; we now knew we were safe. After about 20 minutes, the boys said it was safe to leave and they would direct us back to our hotel which they did. We tried to give them some money. They refused. Shaken but safe, we survived a nasty riot.

Crowds moving in one direction without music, children or happy faces are NOT going somewhere you should also go. We were in a main tourist area in Cartagena Colombia and had not expected anything but nice shops and cafes.

Always have a map showing your hotel and have its phone number in your phone. Almost every major hotel gives out free maps so when you check in, ask for one and have them ink in your location.

Know how to use your phone overseas to access the internet and/or make calls even if it costs you $$. Many women think their phone will work, but never ask their carrier prior to leaving the US.  Many do not know how to dial when overseas once the phone is active. Following on that, most phone companies will offer an overseas plan; ATT for instance charges $40-60 for a month of limited calls, texts and emails. If you think you will only use the phone for emergencies, it is cheaper to make that 1-2 short calls with roaming fees of $3-5 per minute. Again this changes country to country.

Always have the US Consulate/Embassy phone number in your telephone. The Embassy suggests you register in the STEP Program https://step.state.gov/step/ when you travel; we suggest you leave your itinerary/ contact numbers and phone number for texting with a friend/family/work partner.

Once you are stuck in a dangerous situation:

Start walking away asap; do not be curious- go. Hold each other tightly even if you are new friends. Beware of pickpocketing so keep your valuables between you and a friend or just keep them tight to your body. I like to wear pants with an elastic waist in order to tuck my money belt inside if needed.   Find a store or hotel that will let you in immediately. Stay away from windows or if you can, go up the stairs. Why? Protesters might take shelter in the same place with police right behind. Do not try to get back to your hotel right away; running crowds can easily crush you. Do not take photos and avoid windows as you might get hit by a stone. Stay put until locals emerge.

Use your paper or phone map so you know where you are vis a vis the hotel.  In our case, young boys asked to help us. We were very leery but they since walked us in the direction of our hotel we trusted them.

1— visits during elections or right after, or during unpopular political situations such as we have in Paris right now.

2—  visits during major festivals that are known for unruly drunk crowds as in Trafalgar Square in London over New Year’s Eve or Times Square same time.

3— visits during planned political demonstrations like May Day which is Europe is a left wing oriented and can be violent.

4— during anti-American parades which can happen when our government is attending a major meeting like the G7 or during this administration: during a global climate symposium.

Finally, check out any English language local newsletter or paper if you are unsure. Here is what the English paper in Paris said the week of Dec 4 : future protests will be announced on Facebook and in other social media. That short information from The Local in Paris might save you a lot of time and worry. Here is the local English language paper in Paris: https://www.thelocal.fr/

You may find other English language newspapers and newsletters for locals and expat easily on line. They are useful for information on English speaking events you might want to attend.

These are important travel tips from The Women’s Travel Group, https://www.thewomenstravelgroup.com   We can take 2 more on our Greatest Italy Trip and 1-2 on our Albania ‘new destination’ adventure. Other trips with space or early birds are on our site.