I was itching to get away, but feeling a bit chicken I opted out of Europe and chose a cruise to Bermuda on NCL’s Breakaway out of NYC.

Bermuda is a chain of 181 islands that is 21-square miles and is in the Atlantic not the Caribbean Sea. And as I learned in the Trivia game one day they use limestone roofs to withstand hurricanes and collect precious rainwater.

Normally I cruise on a 2,000-max passenger ship and the Breakaway is over 4,000 which was a tad much. However, with the theatre at the bow and the Cafe deck at the stern, a Tomato would be hard pressed to gain weight!

We docked at the Royal Naval Dockyard at one tip of the Island. This is the home of the 35th America’s Cup in 2017 and is a UNESCO World Heritage Site and I was happy to view some of the boats out there. 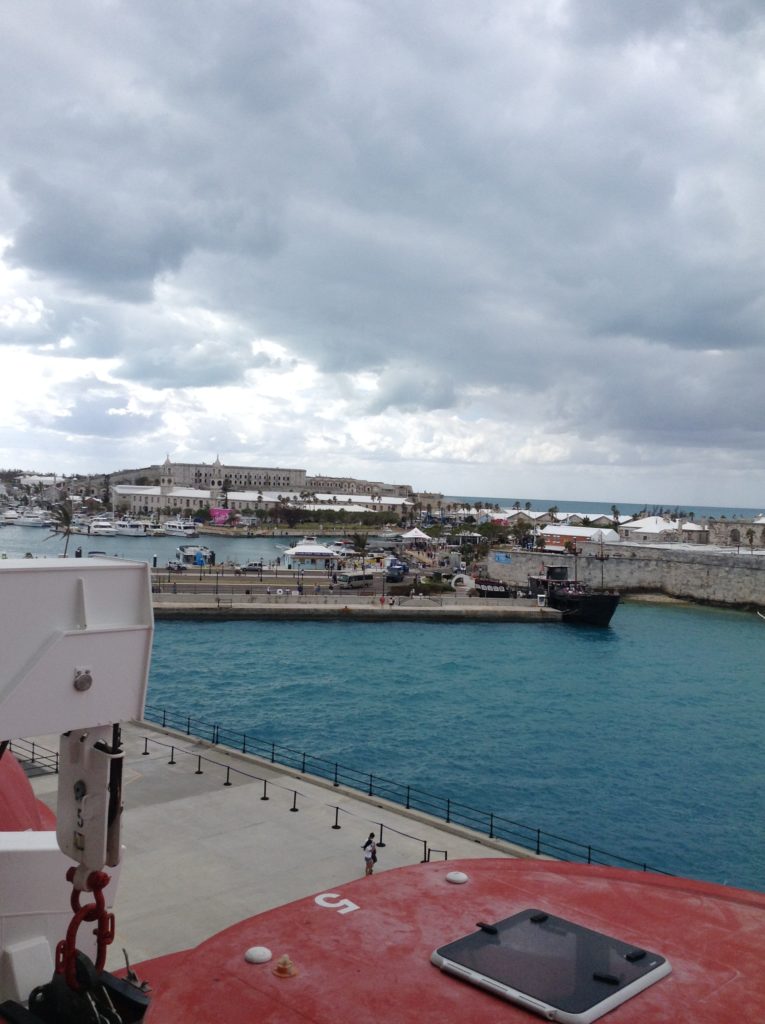 There are 24 shops in the Clocktower shopping mall (a tram goes around the complex), cafes, etc., which is normal with these ports.  Also, there was the National Museum of Bermuda & Commissioner’s House; a complex of many buildings. 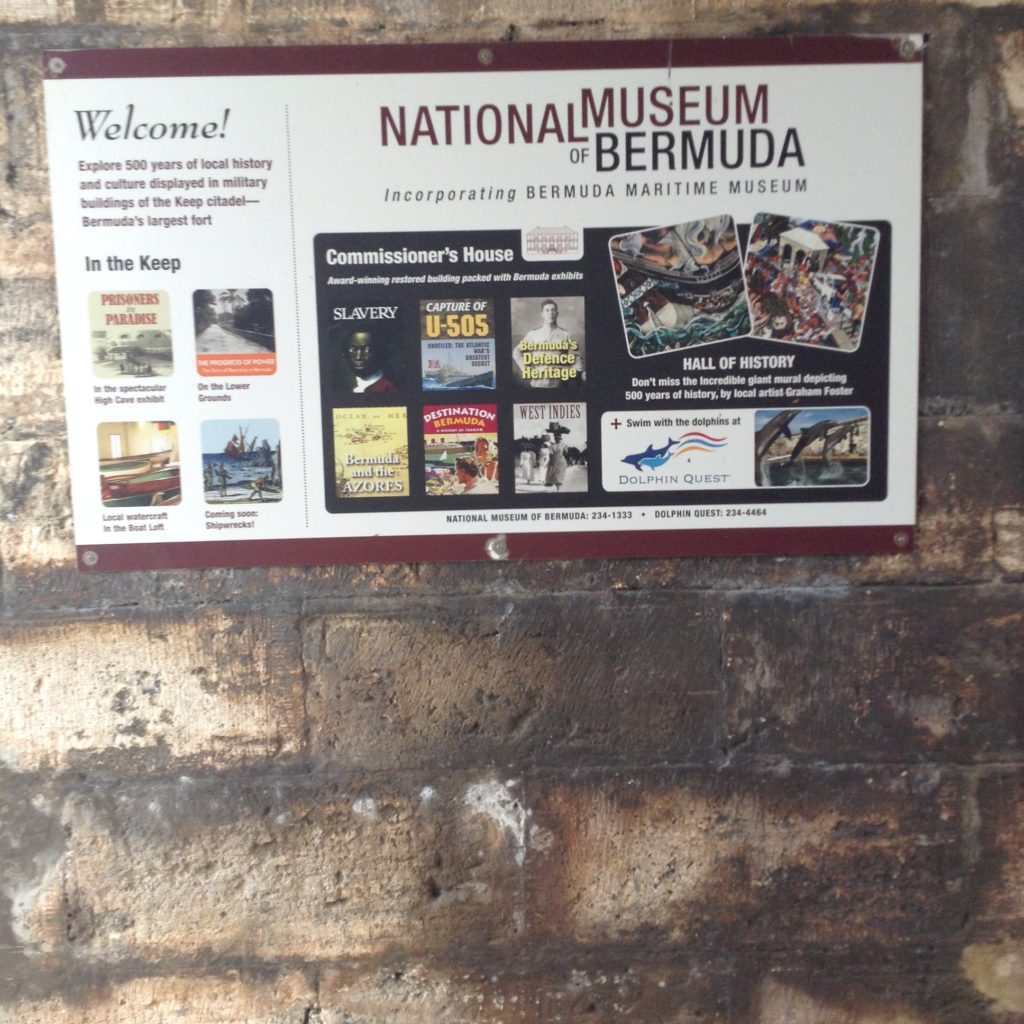 Hamilton is reached by a 20-minute ferry and docks right on main street. After checking my email at their quaint library I walked over to The Angelican Church of Bermuda on Church Street with a beautiful interior. 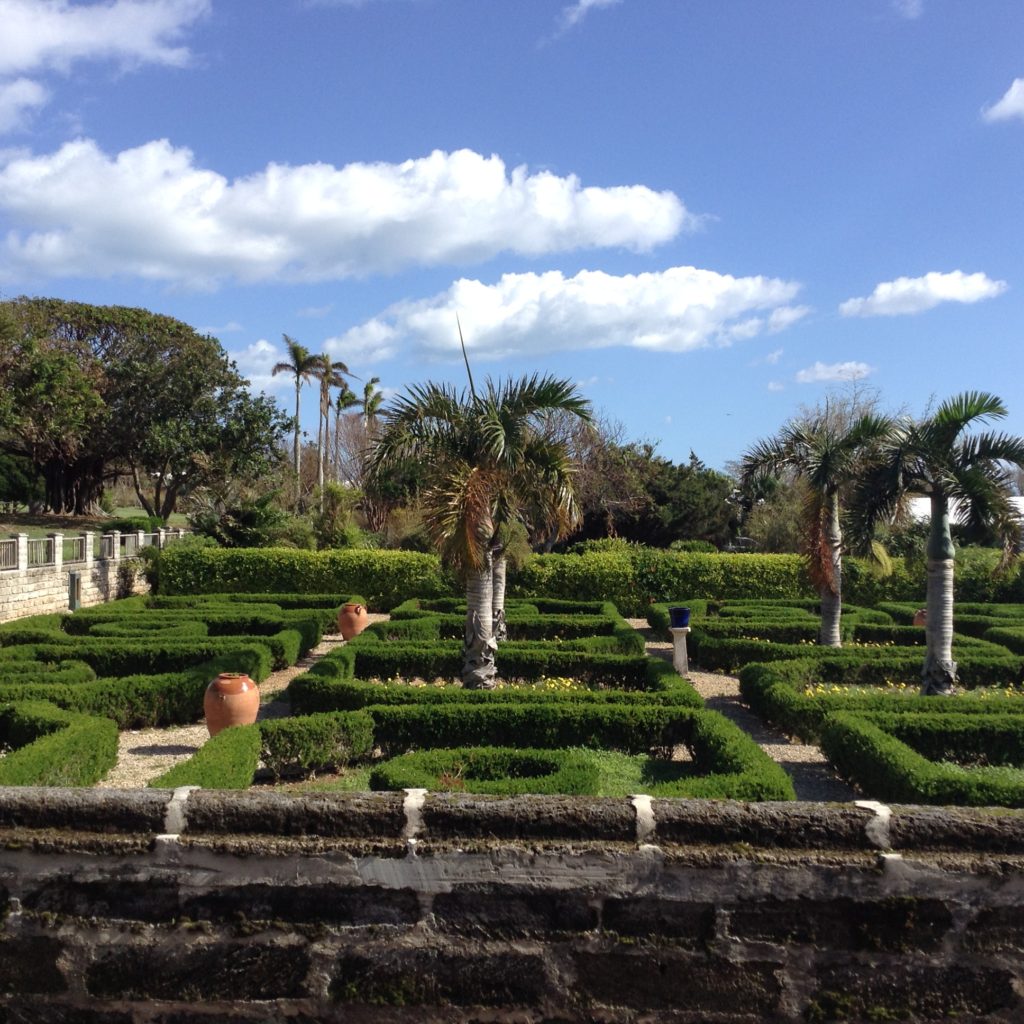 And did some window shopping. Such cute stores! 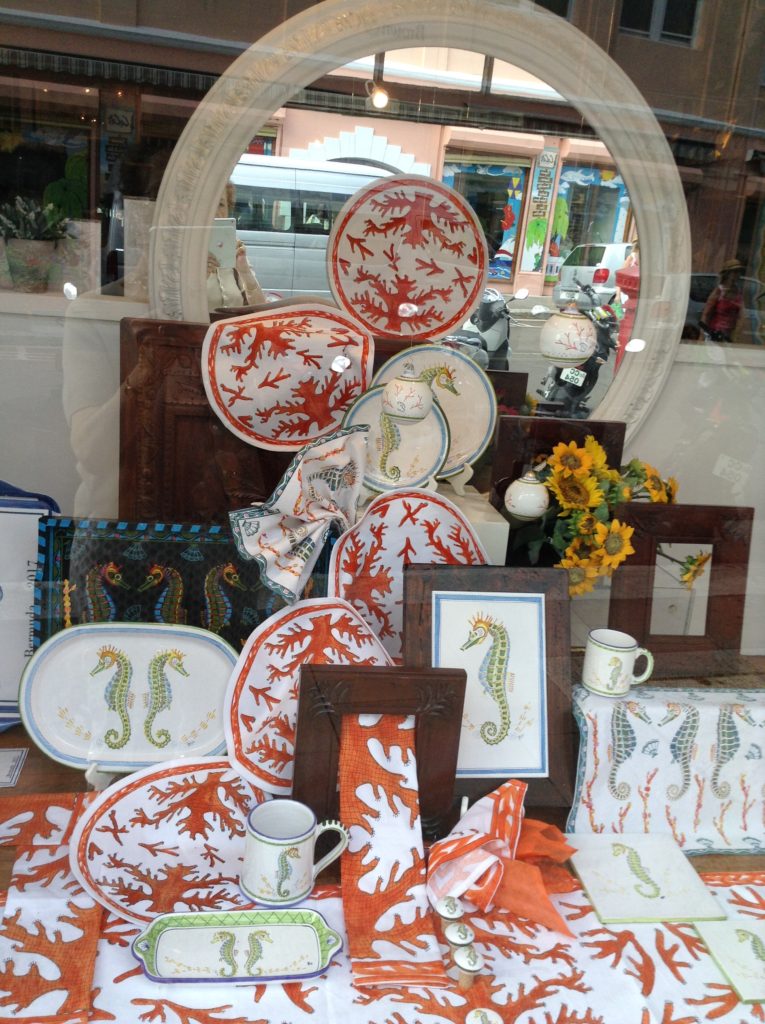 Coming back a gal told me I had to look into their Post office…now that is even more quaint!! 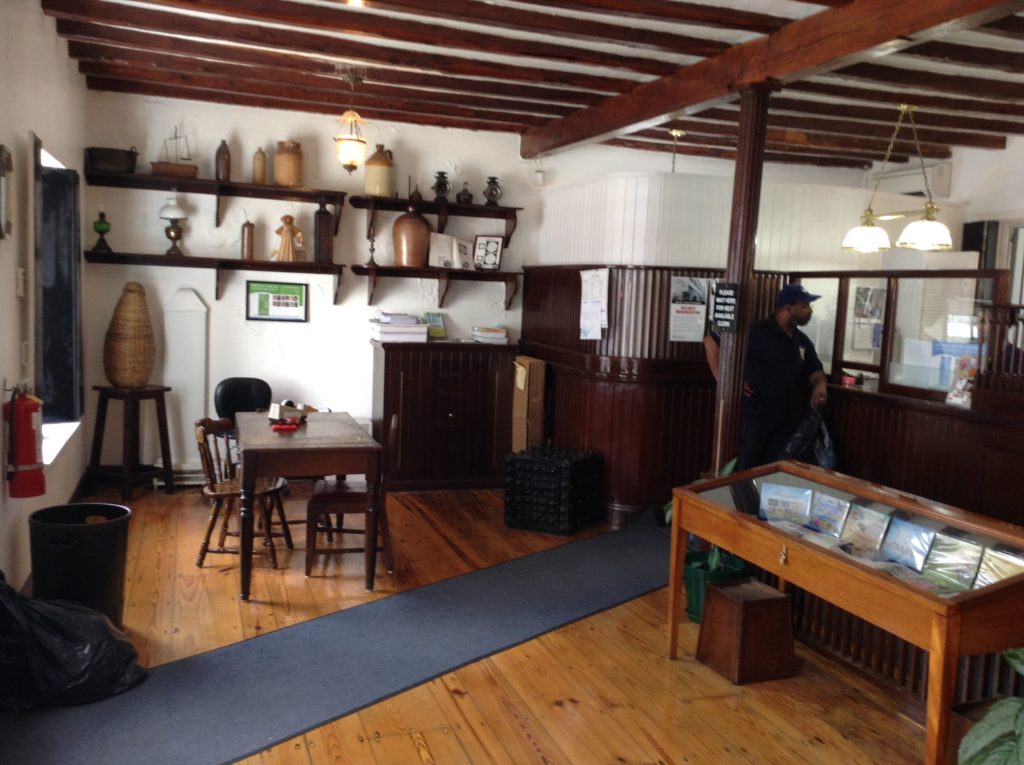 The next day was a 45-minute ferry ride over to St. George’s. And a free tour of Bermuda Perfumery. Begun in 1928 this was a fascinating tour of the makings of the signature scent Lili Bermuda which this tomato liked a lot!! 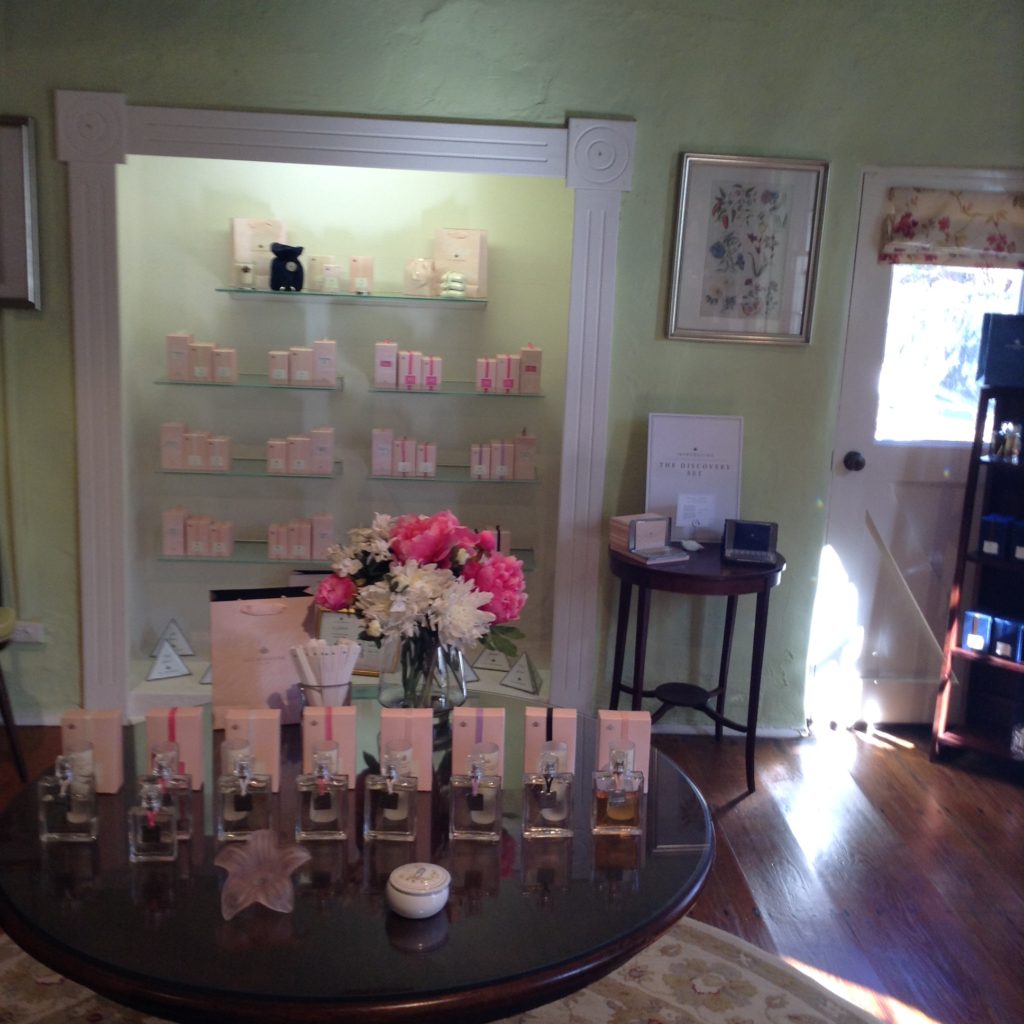 In King’s Square is the re-enactment conducting an 18th century trial wherein the offender is publicly punished and includes the ducking of a nagging wench…good thing we had warm weather!!!

There are replicas of the stocks, pillory and the whipping chair which is a photo opportunity for tourists.

This square also houses St. Georges Town Hall where the current mayor is a lady. 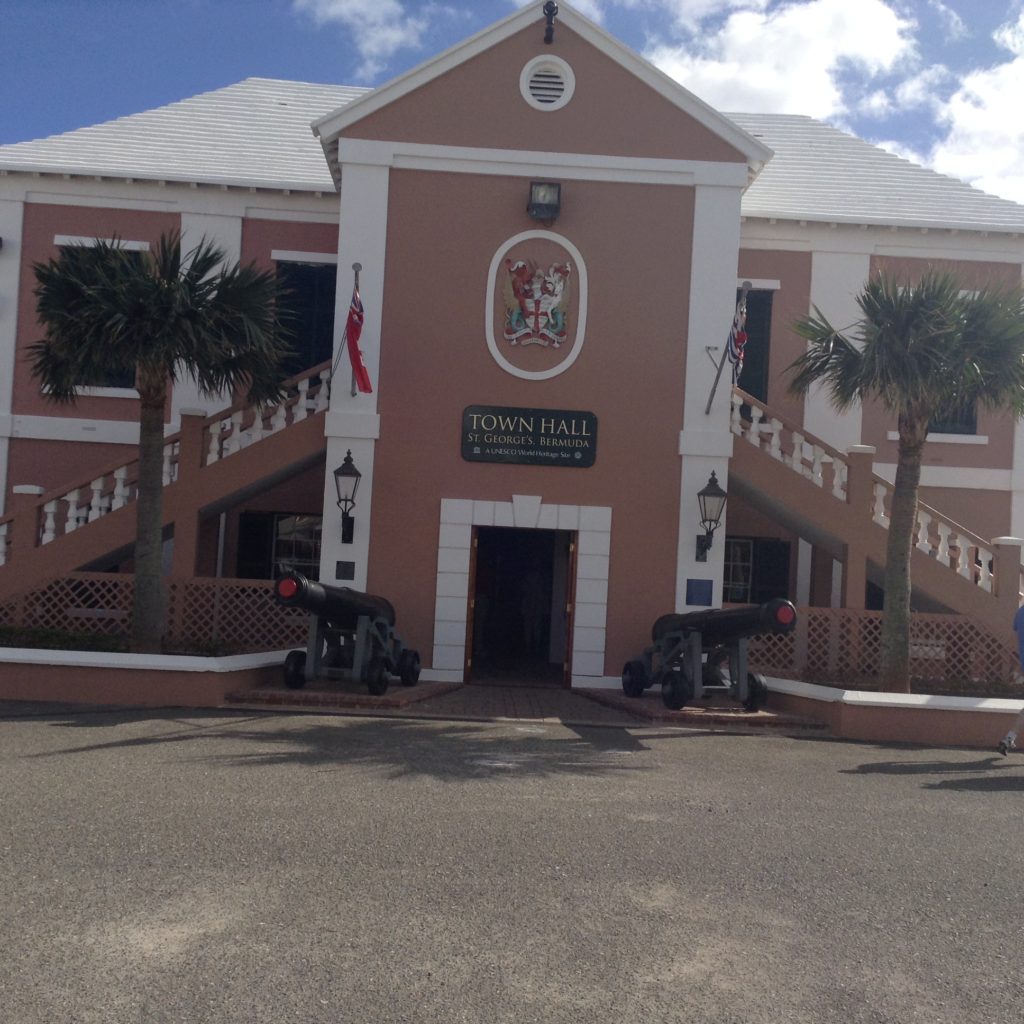 St Peter’s Church is the town’s biggest attraction. It is the oldest Protestant church in the Western Hemisphere and is packed with interesting artifacts. 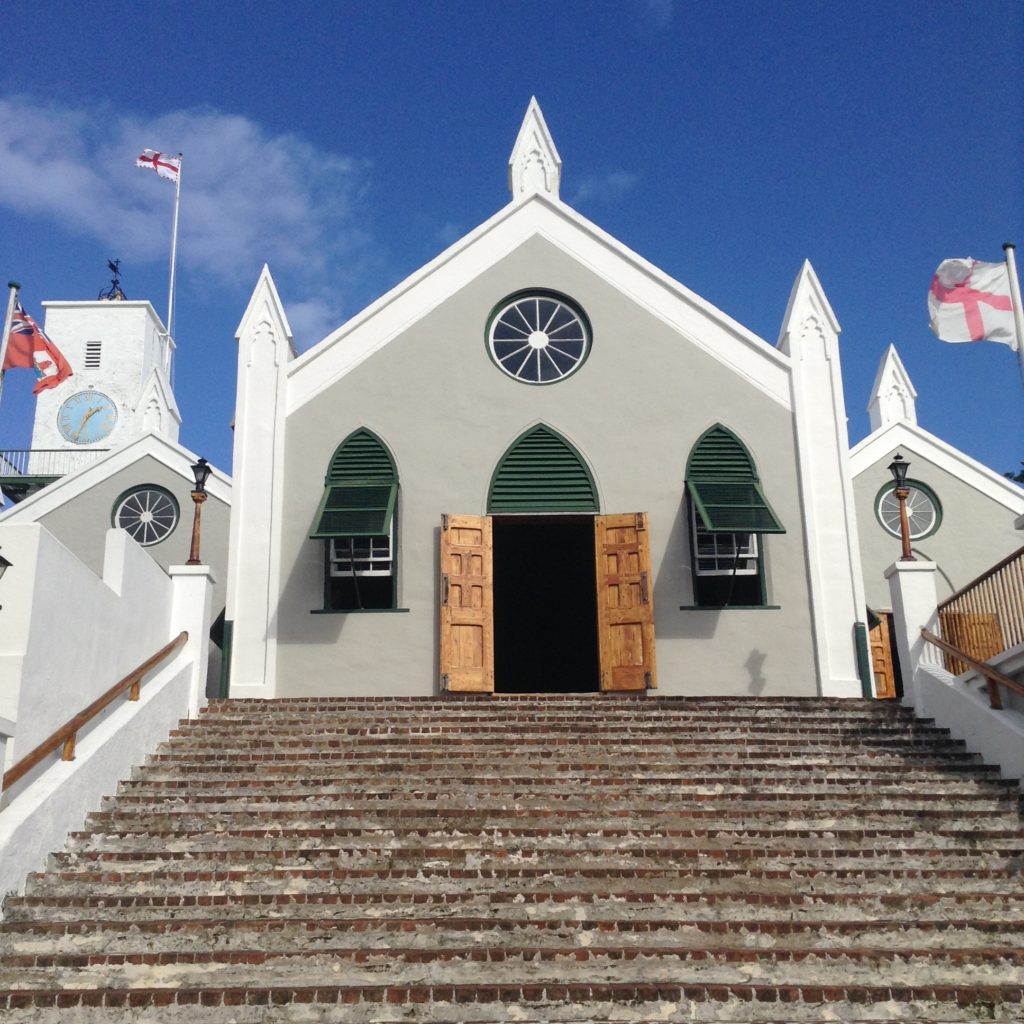 St George’s Historical Society Museum, established in 1920 is one of the island’s oldest and most unique institutions and the interior is also quite quaint. 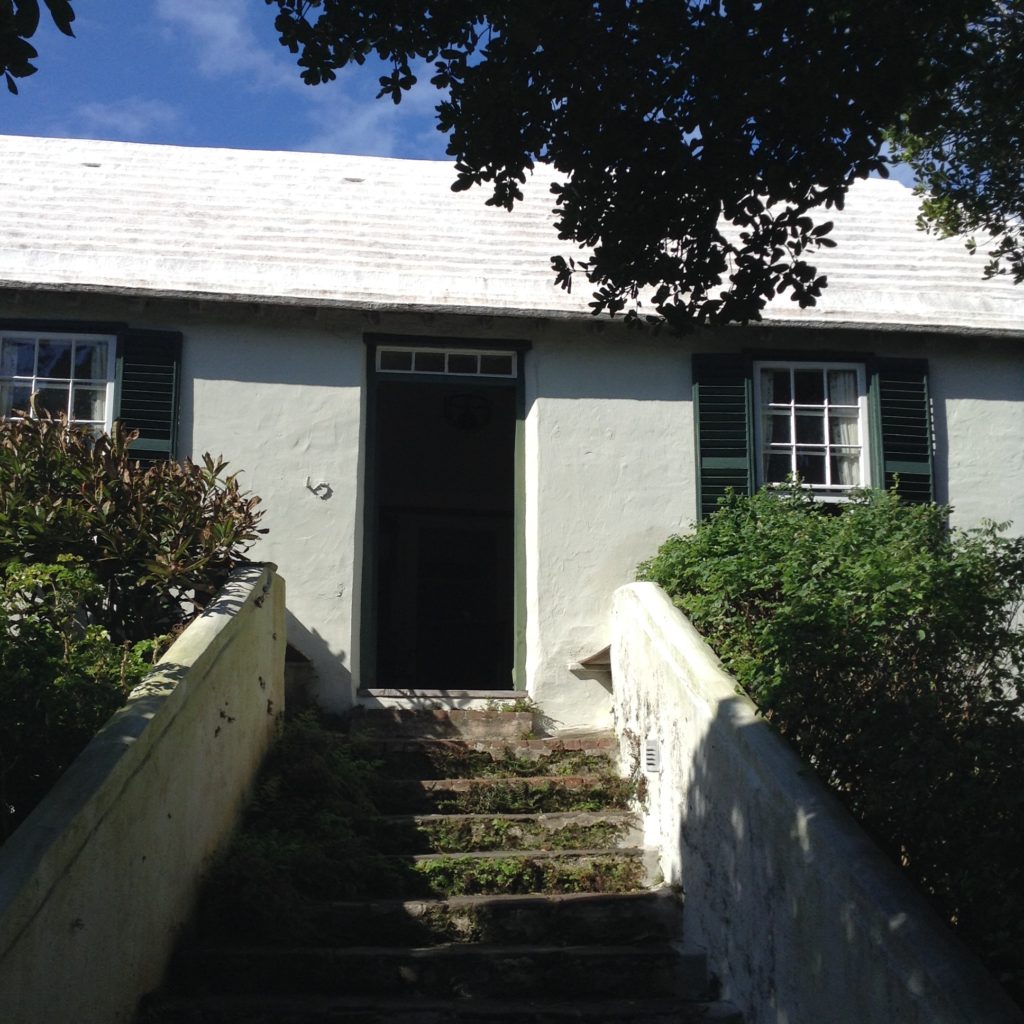 Now back to the cruise. The sea breeze that came off my balcony made this trip enjoyable albeit it was a very small balcony. NCL has improved their menus under the leadership of Geoffrey Zakarian and one could dine in the topside Garden Cafe, 2 restaurants facing each other, a noodle bar or the largest room which had a band for dancing; all complimentary. Then for an up charge there was the steakhouse, French, Japanese, sushi, Brazilian, and seafood venues.

If one wished to imbibe, one could find a bar or lounge on 8 of the 16 decks…and many did!

Entertainment was superb. Some shows were Rock of Ages, Burn the Floor, Second City to name a few. Only Cirque Dreams & Dinner Jungle Fantasy carried an upcharge which was well worth it. There were various singers also performing beautifully throughout the ship.

They have a fabulous Cruise Director DanDan and his assistant Luz, both of whom can not only sing but also were in another show.

And now back to real world of work!

Rhea Albert lives on Long Island and loves exploring the world and sharing her travels with us.