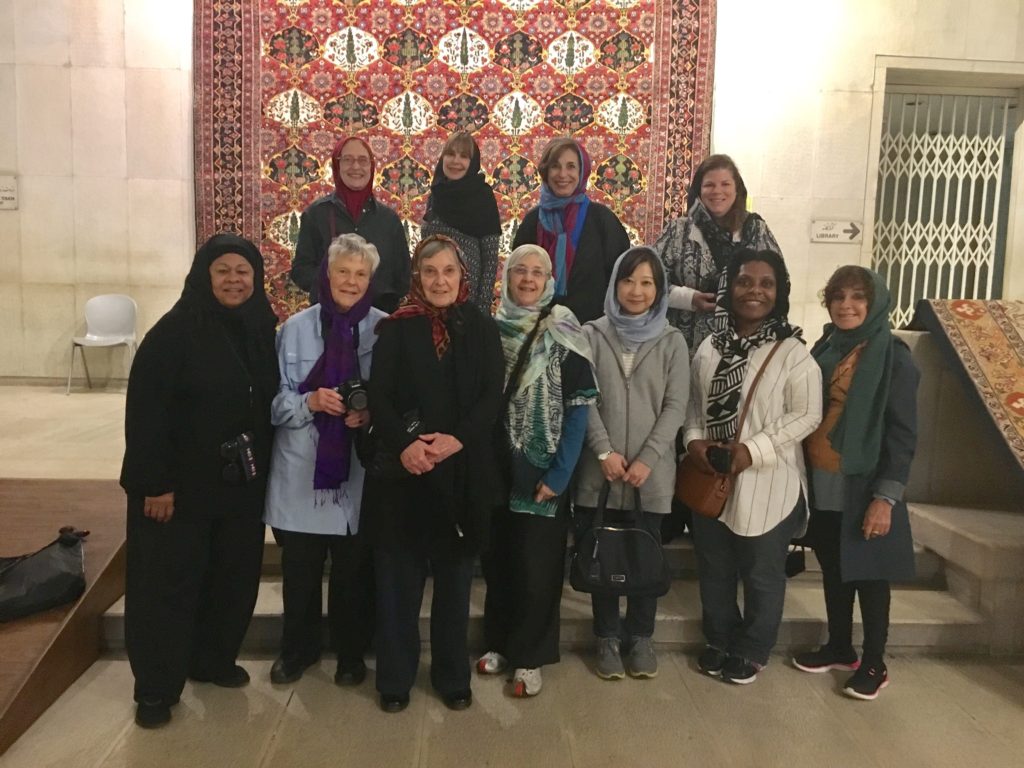 11 women from The Women’s Travel Group recently returned from Iran. Despite a US lack of diplomatic relations, Americans have been going to Iran in greater numbers for last few years. Since the 2013 agreement with Iran, American and European tourism has jumped.  Companies like ATT are opening there; however Americans and American women are still a rarity. Our itinerary was Tehran, Yazd, Shiraz and Isfahan. One member of our group added Kashan, an exotic trading center mid desert. Our trip included US election day, a coincidence that made it even more exciting.

We organized the trip for specific reasons, some self-indulgent, some intellectual. The self-indulgence was to see Iran’s spectacular sites, many of which are ranked as top in the world. 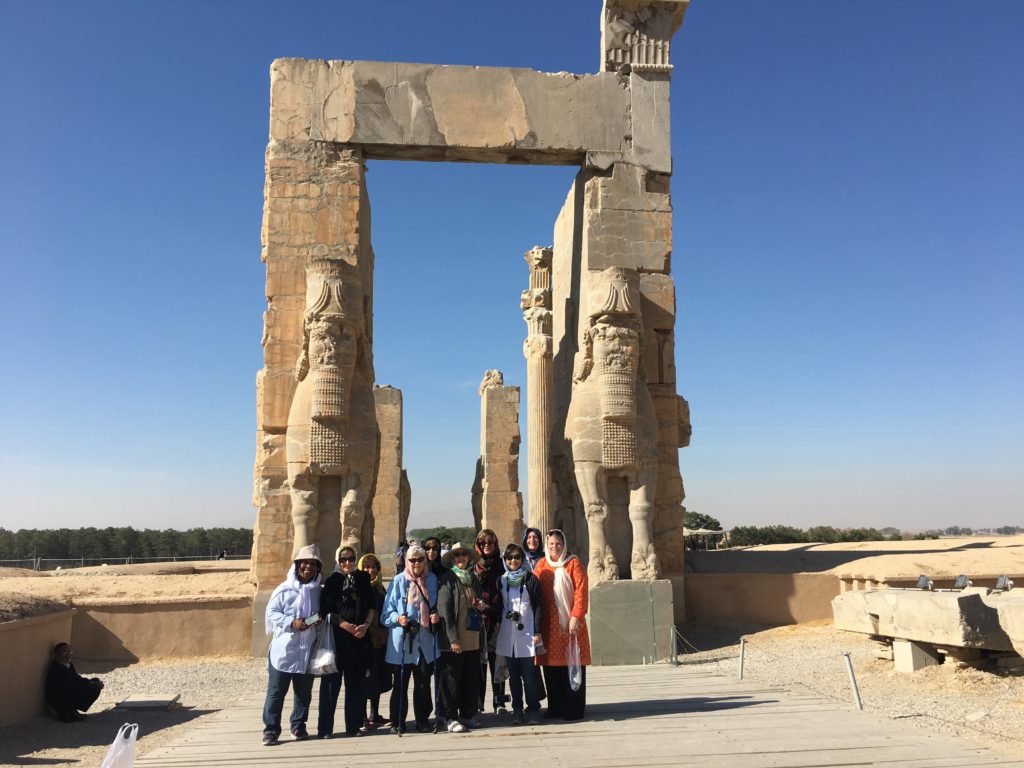 The 550-330 BC ruins at Petropolis where Cyrus and Darius ruled are preserved acres of palaces, walkways, tombs, statues, and perfect walls covered with almost unscarred stories from Persian history.  Airplane hangar type buildings cover a world of griffins, lion statues and friezes, cuneiform written contemporary descriptions of what happened here 2500 years ago.  Crowds are minimal.

Imagine seeing The Taj Mahal or Great Wall of China with no one else around. (There were some tourists in 1-2 areas).

Isfahan is known as one of the most gorgeous cities in the world, with blue tiled mosques and landscaped, fountained  enormous squares. The squares are again sparsely populated and often surrounded by shops and bazaars. The entire city is clean, pleasant and airy while November temps were 70 daytime. Isfahan’s medieval bazaar is a movie. You see nomadic people shopping alongside snazzily scarfed fashionistas. Everywhere was full of locals smiling at us and welcoming Americans back in English. There was no haggling, no uncomfortable bargaining and merchants accepted dollars happily.

Tehran, which we expected to be urban sprawl and grit was anything but.  No dirty sidewalks, no pushy crowds, no beggars, modern architecture side by side with ancient houses, bazaars, monuments and parks dedicated to Iranian heroes. Traffic is hell; walk with locals to avoid being shipped home in a box. There are some pretty graphic anti American posters. Otherwise you are in a major world capital with helpful people and loads to buy if you love shopping. A word about the signs, they are shocking. Be prepared.

Shiraz and Yazd are desert towns with mud brick houses, and enticing alleyways leading to fine walled mansions.  Again, ancient and well preserved with a hotel created from a mansion. We met Zoroastrians, believers in an ancient religion, and visited an Armenian church and museum, plus saw one synagogue’s outside. We did not discuss Israel, it is frankly out of bounds, but there is a Jewish community in some towns and they are mainly doing well financially. Politically, we did not explore. There are limitations as to questions in Iran.

So you know, hotels for our tour, were modern/luxury or renovated palaces with good amenities. Food is excellent, fresh and loads of kebabs and fish, served, in our tour in fine restaurants or hotel dining on long days. There is no alcohol. You must drink bottled water.

Roads, airports and airplanes are good. Entry into Iran was not at all scary, after we realized that Americans get extra attention— as we are new tourists. Officials seemed as interested in practicing their English as in reviewing our visas and passports. This is a cash only country; many merchants had credit card facilities outside of Iran for carpets etc. but no US banks operate yet in Iran. Our trip was inclusive; you only needed cash for shopping.

Our intellectual interest in going to Iran?

The intellectual interest was to see how Iran and a theocracy operate, learn what Iranians think about us, while we see them as the enemy? We wanted to understand the whole Shia/Sunni issue. Are those black garbed or modern scarf covered women anything like us? What about the minorities: Jews and Armenians? Before the trip many of us read from our reading list. During our two weeks in Iran, we only scratched the surface. Here is some of what we heard:

About Trump. “It is all politics not people.” “Both our countries have people at the top who make the decisions”. Iranians do more of what they want at home in private including wearing revealing even clothes.

About our election. The word ‘rigged’ has international repercussions. Our election was parroted as rigged in Iranian-English newspapers.  FYI Remember English language papers are not read by Iranians.  American elections are watched worldwide; the details of our system are not understood any better than we understood who appoints the ruling group in Iran.

About women.  Note we had to wear scarves from landing day one, until the plane took off on departure. Teen age girls ran to do selfies with us.  Iranian women were not what we expected. Even religious women- covered head to toe in black- smiled at us everywhere. Iranian women express themselves with designer scarves, skinny pants, knee length ‘manteaus’, a sort of coat.  A large percentage of middle and upper class women have nose jobs, wear colorful contact lenses, streak their hair and maintain perfect nails. They have engineering degrees, go to seminars away from home, and the divorce rate is 60% for younger women. Is this the image we expected? Absolutely not. Are they earning what men earn, no. Are they equal in the home,no. Are they ready and educated to take advantage of change should it come, yes. Do they think about the same things we think about: health, family, climate change, education, yes. 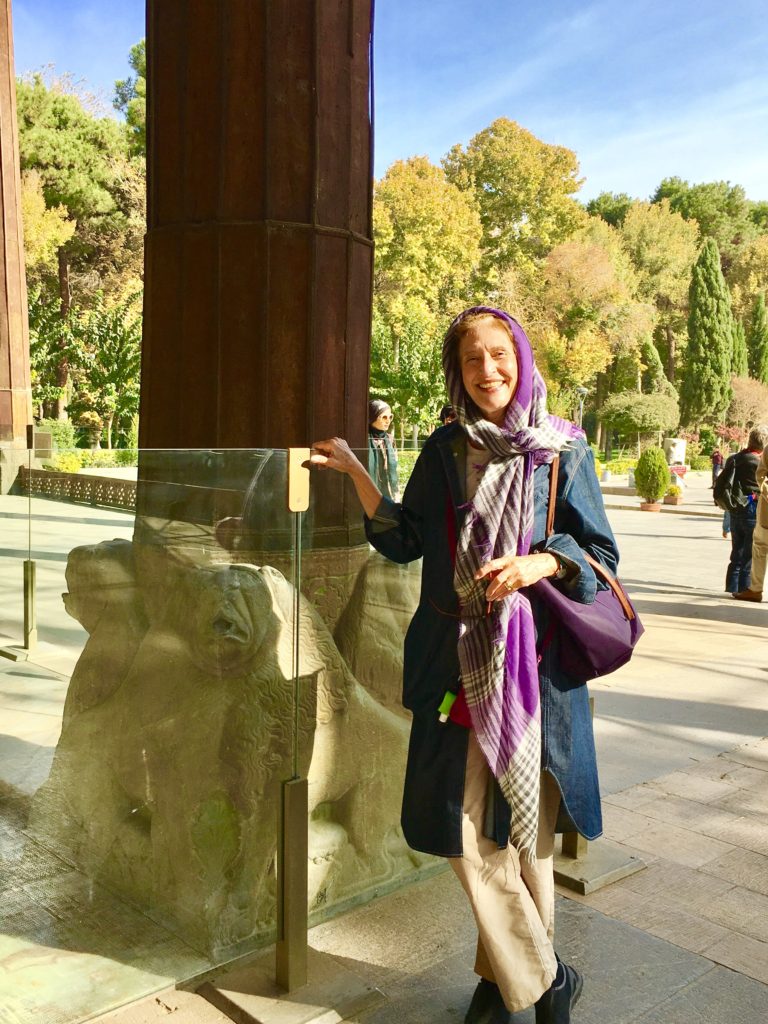 Our guide was a woman who knew the system, bossed men around and had chosen to live in Iran even though she and her children had UK passports. Better futures. Pride in country. Heritage first.

About religion. This is an area we had a hard time understanding. Visiting mosques andTrav religious enclaves could not explain enough.  Unlike much of the Islamic world, Iran was never a colony and has a long history of powerful Persians: Cyrus the Great, Darius, Xerxes, the Khans.  The theocracy seemed to us to be the Iranian response to Western development. There is still raw feeling about the US and Britain’s possession of Iranian oil after WWI and about our support for Sunni Saudi Arabia. Because of sanctions, Iranians have had to manufacture everything themselves.  There is pride in that self-sufficiency. Shia is key to the national image and pride; the Ayatollahs are metaphorically or factually descended from Mohammed.

We learned how bitter the rivalry is between the Islamic groups; our guide told us that in Mecca, Shia pilgrims hide their Shia-ism for fear of being assaulted by Saudis.  Some of the younger guides we had could not understand why the West thought they were terrorists denying them visas.  One viewed herself as ‘an art history major, desperate for a visa to use her PhD scholarship in Amsterdam”. Frankly we never really fully understood the religious rivalry or hatred.

About politics.  The answer is basically avoid politics and any controversial topics like Iraq, Israel, terrorism. If you want to visit Iran, you can chat discreetly with your guide, but do not compromise him or her. There are rules to obey, and friendliness of the locals should not make you forget these rules. You will see some awful signage about America. Your phone might be hacked. Accept this as propaganda and control from above.  Listen to Iranian complaints about American slowness on lifting sanctions; learn and listen but hold back on strong opinions. If this bothers you, don’t go. If you wish to learn and be seen as a friendly fellow human, go. If you wish to see Iran, go soon before the lines, hotel overbooking, and inflation from sanctions lifting.

The Women’s Travel Group goes to many unusual countries with a view to learning and sharing. We will return to Iran in November 2017 and booking it now.  Upcoming trips are to Mexico City, South Africa/Botswana, Puebla and Cuernavaca, Berlin, Tuscany, Russia and more.