Modigliani’s work is complemented by examples of the various multicultural influences—African, Asian, Greek and Egyptian—that inspired the young artist during his early period.  Also included is a selection of life studies and female nudes.  His fondness for performance, including theatre, street entertainment and the circus, is reflected in numerous early drawings, often sketched from a blend of life and imagination.

The exhibition includes his drawings of the Commedia dell’Arte character, Columbine, as well as circus performers.  Many of these works—like others in the exhibition—reveal the acuity of his psychological awareness, which had the effect of transforming simple sketches into portraits.  Needless to say, I enjoyed It very much and think you will, too. 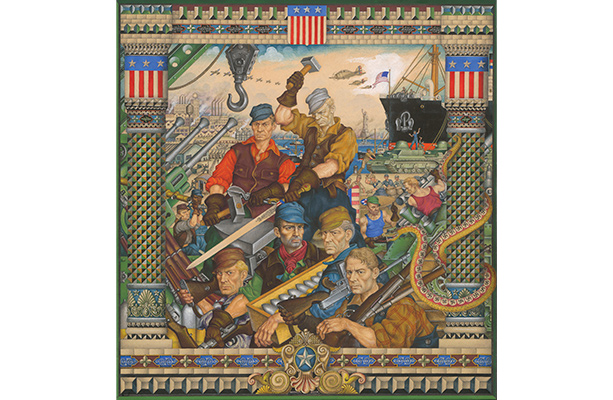 Arthur Szyk (1894−1951). Arsenal of Democracy, also known as Democracy at Work, 1942. Watercolor and gouache on paper. Property of a Private Collector, New York

I just returned from the New York Historical Society and must tell you all about it.  It showcases the art of the Polish artist and cartoonist, Arthur Szyk.  He was very popular during WW2 and used his art instead of guns to help win the war.  His ammunition was in the form of witty cartoons.  I loved it and didn’t want to leave.

Szyk was a one-man army fighting with his paintings, drawings and water colors against Hitler and the other Nazis and the Axis. Szyk’s brilliant and outspoken works testify to his horror at the ongoing murder of European Jewry, his anger at restrictions on Jewish immigration to British Mandate Palestine, his commitment to American democratic values, and his revulsion to racial injustice in his adopted country.  I cannot describe how wonderful this exhibit is.  You simply must see it for yourself.