Two New Musicals by the Sea

Once On This Island grabs you the minute you start to file into the theatre.

With makeshift plastic tarps draped from the ceiling, and goodwill-donated looking items of clothing hanging everywhere, the atmosphere creates the feel of an island with little resources following the devastation of a tropical storm.

Pre-show, actors are out and moving about on the “stage” which has been transformed into a beach. Yes, there’s sand everywhere, a lagoon, a rooster in a coop, even a little goat being led around. The experience of Once On This Island is well underway.

And what a lovely experience it is. The word ‘joyful’ comes to mind as the fable of the little baby girl who has survived a devastating storm,  taken in by two older people who become loving parents, unfolds. They live on an island in the French Antilles, with nothing more than the clothes on their backs, but are rich with family and love. When Daniel, a wealthy, white boy from the other side of the island where luxurious hotels line the shore, drives through their section of the island and has an accident, Ti Moune, the now grown girl, nurses him back to health.

Eventually, Daniel leaves to return to his palatial environment, but not before he realizes that this girl was his angel and she understands that he is her love. What happens when Ti Moune goes to be with him behind the locked gates of his home is where the story takes a heartbreaking turn, helped along by the presence of the Gods, who drive the action. 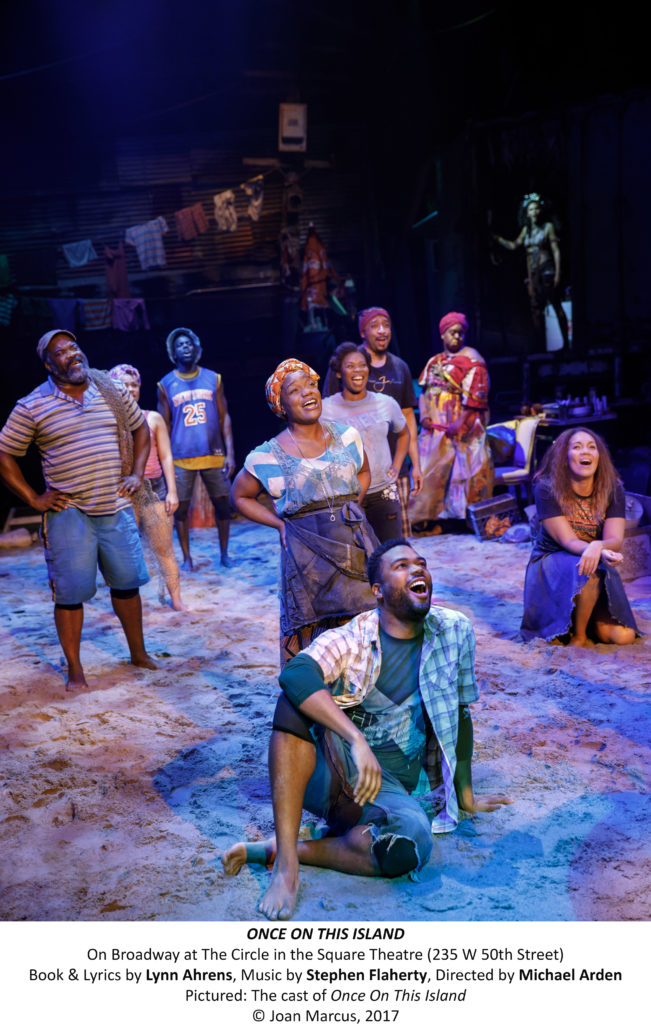 Each character is clearly defined in this beautiful theatrical piece.  There is darkness and evil, beauty and light, rejection and love, redemption and acceptance. life and death, all rolled up in a joyful (I must use that word again) tableau of mankind. Michael Arden, the director of this musical revival, composed a moving note in the Playbill. ”It is my hope,” he wrote, “that the story of Ti Moune might inspire any person to become a catalyst for change.”

The performers in this musical are just wonderful. The young lady, Hailey Kilgore who plays Ti Moune, is making her Broadway debut, as is her character’s love interest, Daniel, played by  Isaac Powell. We will be seeing both for a long time.

Lea Salonga plays the goddess of love, and gets to sing the beautifully touching “The Human Heart.” Each song gets enthusiastic applause, deservedly.

In addition to director Michael Arden, the creative team includes choreographer Camille A. Brown, and set designer Dane Laffrey. The team has surely built something special here. With fabulous book and lyrics by Lynn Ahrens and music by Stephen Flaherty,  fascinating sets, and even a goat who sports a barely visible diaper, you have every reason to get yourself over to Circle in the Square. They’ve thought of everything.  http://www.onceonthisisland.com/

And so did the producers and creative team of Spongebob Squarepants.

They have created a whole undersea world (I told you both shows were by water) where Spongebob lives in a pineapple.
“I can’t even imagine the budget for this show,” I said to myself during the performance. I went on to learn that the budget came in at 20 million dollars. You can understand why when you see the show with enormously intricate sets (including two Rube Goldberg style devices on either side of the stage, providing for super clever ways to get things on stage, ) a truly talented cast of performers, and some fabulous music written by a bunch of well known songwriters.

I must tell you, I have never seen one episode of the Nickelodeon phenom, so, I was concerned I would be at a bit of a deficit. But, really, you don’t need to know anything about the show to appreciate the loose story line of this musical.

There is a lot of energy going on up there on this stage, with the cast singing their hearts out. The story is weak, but the show is so fun.

Suffice it to say, all the residents of Bikini Bottom (yes, that is where they live) are about to be wiped out because a volcano is set to blow at a certain time. The characters are racing to save the day, with some evil shenanigans sprinkled in, along with a charming octopus who is desperate to put on a show.

If pure joy is the phrase to describe Once on This Island, silly fun well describes Spongebob.
There is an earnestness that seems to be the overwhelming feel of this musical, where the characters really seem to want to make a difference in some way or the other.
Don’t get too concerned about the plot. Rather, dig in to the sensory experience and the cleverness of the use of sound effects, actually made by a sound effects man who is purposely visible to us in his little sound effects domain, stage right. 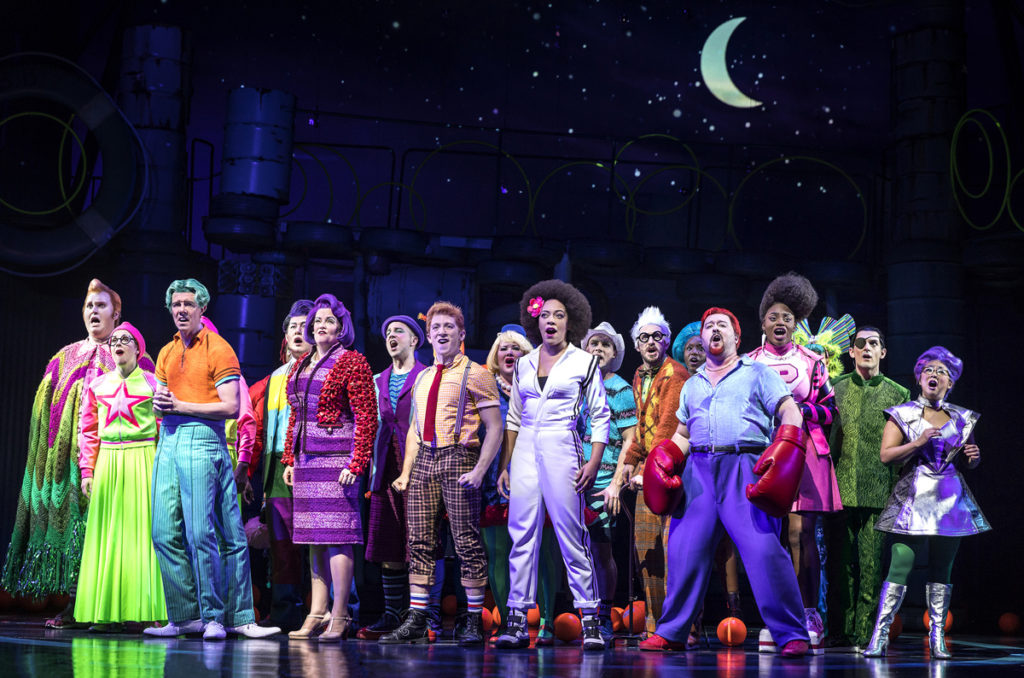 All the performers are outstanding, but Ethan Slater as Spongebob is the star, taking the animated character and bringing him to life in such an enthusiastic way. Slater is an excellent singer and dancer.

The other star of the show is the choreography, created by Tony award winner Christopher Gattelli. A highlight is a tap dance number for Squidward, the octopus, who sports a most ingenious costume and gets the best sound effects to accompany his every move.

The book is by Kyle Jarrow, with a boat load of original songs by the likes of John Legend, Steven Tyler and Joe Perry and Cyndi Lauper, to name a few. Directed by Tina Landau, with psychedelic sets by David Zinn, who also did costume design, this show is a feast for the eyes. You will find yourself smiling, no matter what mood you are in. So, go ahead and bring the kids to Spongebob Squarepants. They will probably know more about Bikini Bottom, though, then you do.  http://spongebobbroadway.com