Untitled at the Whitney 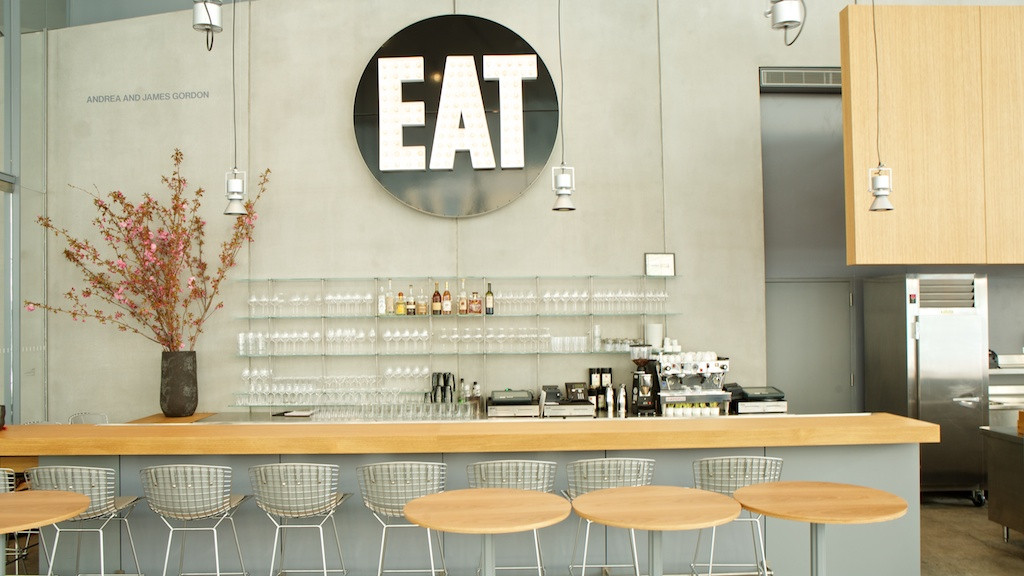 Fortunately my friends and I didn’t check online before agreeing to meet at the new Whitney for a quick tour and dinner at Untitled. We would have discovered both were officially closed on Tuesday. But here we are at 7 pm. It’s drizzling, but grey daylight illuminates architect Renzo Piano’s soaring glass expanse under the museum’s cantilevered entrance, up a few steps on Gansevoort Street.

With its poured cement floor, wood furniture and exposed kitchen, it could be a high school cafeteria, except for Robert Indiana’s The Electric Eat aglow as you enter. America’s “Outstanding Chef 2015,” Gramercy Tavern’s Michael Anthony, looks up from behind kitchen counter, recognizing me from an early dinner one month ago.

“I thought we’d stay open to see if anyone comes when the museumis closed,” he says a bit anxiously, gazing at the spottily inhabited room.

The menu is compact, if not terse, but when gal pals meet after almost any separation, there are cries and clucks and “how good you look”s before we can focus on dinner. I’m sipping the rhubarb-ginger vodka Collins. I’m not much of a clucker and I’ve already decided what we should eat – everything I didn’t try the first time. I hope to distract them from the lobster toasts I loved as a starter then.

So, it’s only a question of time before the waiter has poured their wine and we are warming up with “shaved chips and dip,” homemade potato crisps to drag through an onion potion tinted bright green with pickled ramps and spinach. Salty, addictive, too soon gone, the chips are superior to overly gentrified crab-and-pickled-pepper fritters.

I’m into vegetable-forward like so many New Yorkers these days. I want to try all five veggie options on this menu ($9 to $14) but my friends are lobbying for the asparagus tossed with furls of turnip thins, bacon and pecorino, and the cauliflower, cooked and raw and painted with curry sauce and crushed black sesame, both fussy and delicious.

I watch the chef teaching a lineup of newbies something – plating maybe. Anthony is tall inside the kitchen counter. They are mostly smaller, very earnest. Perhaps they will grow. The room is filling up. It’s grown dark now and well-dressed millennials have found their way around the corner to Untitled. Whether or not the museum is open means nothing. They’re walking in the drizzle after shopping or stepping out of Ubers.

Tiny mussels marinated in white balsamic vinegar with favas and a big creamy bean called yellow-eye — from a farm in Cuyahoga Anthony has discovered — is possibly our favorite. Black bass is anchored in a mushroom broth sparked with black pepper and Korean red pepper heat, but it’s too cooked for me. My pals seem unenthused. too.

The lamb chops (just two, to keep the price at $27, I’m guessing) on creamy emmer purée with asparagus cuts and bits of green olive are another animal, shared at first, then delicately devoured. Pamela, and I, both shameless, don’t mind picking up the bones. 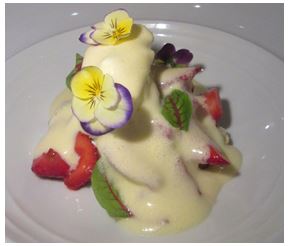 We let Norah choose dessert. Remember the old adage, “You can never be too rich or too thin”? Well, that’s the chocolate truffle tart, deeply rich with the crunch and fruit of cocoa nibs. The kitchen has sent along an exquisite mirage of strawberries in a ricotta cloud on pound cake with tiny pansies, looking like a Japanese drawing of a cloud-covered mountain. Ambrosial is the word.

We are also confronted with my favorite of Gramercy Tavern’s pastry chef Miro Uskokovic’s almost American-looking desserts: the scrumptious peanut butter crunch cake striped with zigzags of blueberry glaze. His couturier goodies sit in pedestaled, glass-covered stands on the counter as if in a diner. Or in a painting by Whitney stalwart Wayne Thiebaud.

My friends think the food is mostly delicious, but too fancy. We’ve spent $78 each, we all notice. Pam’s last glass of wine, the Château Sénéjac from the Haut Medoc, was $17. She wants something more like lunch when she comes back to explore the museum. “They need to do a burger. Did you notice, they didn’t even have a burger?”

Of course, we’ll be back for lunch or a snack when we come to see the art (so we can say we did.) Nighttime Meat Market hawks will certainly give it a try.

“America is Hard to See” is the opening show now playing at Renzo Piano’s rousing new Whitney. And “Untitled: Restaurants are Hard to Name” is the theme below. I find myself seriously put off by the name.

Untitled seemed cheeky and moderately annoying when applied to Danny Meyer’s less ambitious coffee shop at the uptown Whitney, where another friend and I would not have dreamed of complaining about flaws in our lunch since, after all, it was just a modest museum pit stop.  But now Meyer has taken on the elevated feeding challenge at the new, grander Whitney by bringing in his top gun from Gramercy Tavern. Untitled will be open till 10 pm. He wants to draw the dinner overflow from The Standard Grill , and everyday plebeians who can’t get into Santina.And as of June 5, he began trolling for winos after poaching DBGB’s dynamic Eduardo Porto Carreiro to unleash some serious bottles and significantly lower prices as sommelier here. It’s a rave from writer Levi Dalton, who knows more about wine than I do. (Read it). But Dalton criticizes the list for omitting grape varieties. He wishes it had called its collection from diverse regions “Wines From Around the World We Love,” instead of “Etc.”What does he expect from a restaurant called Untitled? Well, I wonder too. Couldn’t Meyer and his creative team come up with a loftier name to match the Whitney’s ambition? Something sexy, witty, elegant. How about Gertrude V for the sculptor who founded the museum in 1931? Or Gertie’s. Or Piano Barn for the architect.

“We had the toughest time figuring out the name uptown,” Meyer admits. “We all knew it would be moving soon. We wanted something connected to art. Untitled. So many works of art are called ‘Untitled’.”

I persist. “But isn’t that awfully lame? Many art works are also called “Attributed to.”

“Let’s put it this way,” he says. “The hardest way to come up with a name is to do it by committee. The Whitney’s director loves it. It relates to how many works of art are labeled ‘Untitled.’ I don’t know what I’m talking about,” he adds, ever gracious. “It puts people in the position to respond to the restaurant on its own terms,” he sums it up hopefully.

What can I say? Given the stylish hubbub on this accidental Tuesday, it looks like Untitled might be open Tuesdays after all.