War Paint, the new musical on Broadway, based on the book with the same name, and the documentary, “The Powder and The Glory” relates one of the all time classic rivalries in history between two powerful cosmetic executives. It is a great story, and it is true.  What makes it even more interesting is that this rivalry was between two women, at a time when it was nearly impossible to find a woman at the helm of a business.

We go back to the 1930’s when Helena Rubinstein and Elizabeth Arden, (iconic names in the industry), behaved quite differently from the business women of today.

They did not champion each other’s success, bond, or help one another as they both created a marketplace for products geared toward the average woman. Until Helena and Elizabeth came on the scene, cosmetics were only used by people in entertainment, and, of course, ladies of the night. And with the mission to enhance every woman’s look, a fierce competition between the two began and continued for many decades.

These two women could not have been more different.

Waspy Elizabeth Arden hailed from Canada, while a Jewish Helena Rubinstein, with a thick Eastern European accent, arrived from Poland, both jockeying for position in the new and exciting field.

All along, these strong and powerful women, would strategize and scheme to steal the thunder from each other, to be the best, and to dominate.

That is the story behind War Paint.

And now to the production.

The sets by David Korins are gorgeous, as are the costumes by Catherine Zuber.

And you simply can not deny how glorious it is to see Patti LuPone on stage as the stalwart Helen Rubinstein, tearing the house down with her incredible voice. Equally wonderful is Christine Ebersole as the willowy Elizabeth Arden.

They both command the stage and grab each song with incredible intensity. It is something to witness. 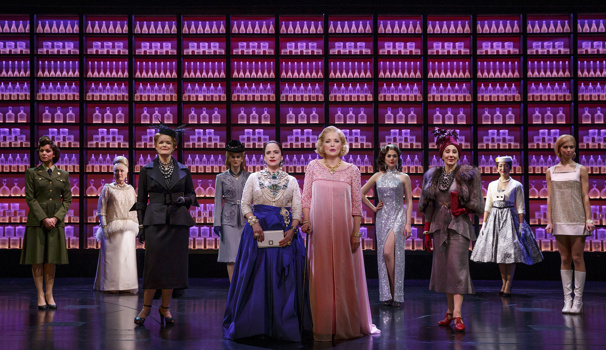 But did I love the musical? No, unfortunately. I found the music tiresome and repetitive and somewhat dissonant, and the material tedious. The structure of the show seemed to be an exercise in providing balance for both stars, so that each one sings a song in every circumstance.  War Paint is simply a great vehicle for both stars, especially for Ms. LuPone, who’s known for playing strong and powerful characters.

Just a few weeks ago, I heard with my own ears the fabulous Patti saying this would be her last musical, because, at her age, she believes there will not be any more leading lady roles for her.

“Oh no!” I exclaimed. Patti is vibrant, exciting and her voice has not wavered in all the years she has graced the stage. But Patti is also realistic and knows the way the business goes. Let’s see. Time will tell. As you might suspect, I am a huge Patti LuPone fan. I love the way she attacks a song and a role. I love her personality, her voice, and her style. So, for that reason, War Paint was indeed special for me.

In real life, the two characters never met, despite the fact that their headquarters were blocks from each other. But, never meeting would equal a very unsatisfying end to this musical. So, to help out history a little, Arden and Rubinstein do meet at an event. And the two divas sing a song together, providing the button that the show requires, as well as a thrill for the audience.

And so, with that, I say, the two reasons to see War Paint are LuPone and Ebersole.

Book by Doug Wright, music by Scott Frankel and lyrics by Michael Korie. Directed by Michael Greif and choreography by Christopher Gattelli.