Ways to Stay Safe in Airports 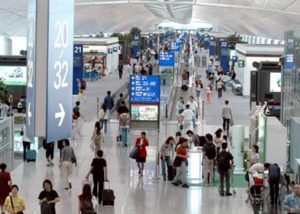 After the Los Angeles Airport incident, you probably thought this article would be about wearing Kevlar in airports. There will always be crazies and airports and airline security people know it and try to prevent them from hurting anyone. But the real dangers in airports are those we can prevent. Here are some of them:

Don’t put small items with long straps into the TSA machines. You risk having the straps caught in the mechanics of the scanner then walking away missing your important stuff. Instead, put money belts and small purses into a larger carry on, zip it and place it in front of your other items.

Don’t lug heavy carry on luggage. One of the most common medical issues with women is back pain from carrying luggage, then lifting it into the overhead bins. Carry-on’s are measured by size not usually weight. Who in their right mind would lift two 20 lb turkeys at once into a top oven?

If you are at all concerned about radiation, ask nicely to be patted down. Many parents of young children do this as a precaution and it only takes a few seconds. TSA staff are under a lot of hidden stress, be nice about asking for this service. The only machines, which emit radiation are made by Rapiscan Systems. So far research by many eminent scientists and government bodies shows miniscule amounts of radiation.

Using bathrooms safely: if available, go for the corner stall where you have a wall on one side and a partition on the other. You can safely put your valuables near the wall so no one can snag them away while you are ‘indisposed’.

Do not brush your teeth in airport bathrooms in areas where you might be using unacceptable water.  Similarly, do not brush your teeth with airplane bathroom water if you can get bottled water from the cabin crew.  Airplanes carry tanks of water and if they only make one stop in the US are somewhat exempt from regulations for ‘safe’ water in the lavatory. Remember tanks also have to be filled from pipes or trucks carrying water, and there are multiple ways for each of these to be contaminated.For detailed information, read this EPA document.

If you think you might fall asleep, you will need to store your valuables where no one can get into them, like under your legs or under a travel pillow where you are resting your head. And you will need to carry an alarm clock so you don’t miss your flight.

If you think you should stop traveling because of the crazies, you have succumbed to a world where headlines mask reality. Reality is that millions of people travel safety every day, and that the crazies are as likely to find you in the dairy aisle of the supermarket as in the departure lounge of an airport.