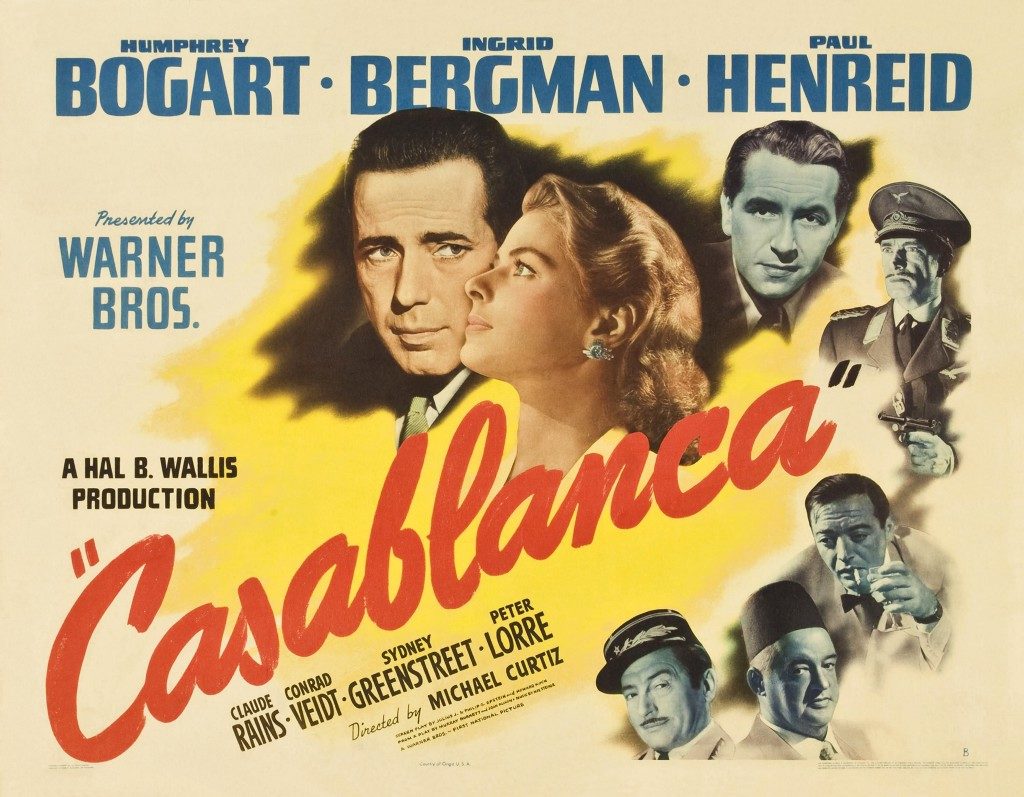 When it comes to classic movies, Casablanca is right up there at the top of our list. And this is the 75th anniversary of it’s premiere –  November 26, 1942.  The American Film Institute (AFI) ranks it number three on its  list of the 100 greatest films of all time. There has never been a remake, and hopefully there never will be.

In case you’ve been living under a rock, and need to be reminded what the film is about here’s the synopsis.  Set in December 1941 in the Moroccan city of Casablanca, the film centers on Rick Blaine (Humphrey Bogart), owner of Rick’s Café Americain, and Ilsa Lund (Ingrid Bergman), the wife of a Resistance leader, who sacrifice being together for a higher purpose: defeating the Nazis in World War II.  Here’s the original trailer.

Everyone involved in the film, thought it was just another flick, but the critics loved it right away too. Here’s Time’s 1942 review.

It’s one of the greatest love stories of all times, and one of our all-time favorite songs is “As Time Goes By”, which is now a classic too. The song was written by Herman Hupfeld for the 1931 Broadway musical Everybody’s Welcome. The music for the film was written by Max Steiner who hated the song and didn’t want it in the film, but Ingrid Bergman had already filmed the scene and couldn’t reshoot.

Here’s the famous “Play it Sam” clip from the movie, which is also the most misquoted line – “Play it again Sam”, was never said in the film.

Lou Lumenick wrote a great article on the history of the film recently in the New York Post.  Here are a few interesting facts he shared about the film.

It’s the Most Quoted and Misquoted Movie too.

Here are a few classic lines from the film:

“Here’s looking at you kid.”

“Round up the usual suspects.”

“Kiss me. Kiss me as if it were the last time.”

“Louis, I think this is the beginning of a beautiful friendship.’’

And thank goodness we’ll always have Casablanca. Excuse us while we watch for the upteenth time. You can buy the DVD at Amazon.  Makes a great holiday gift.