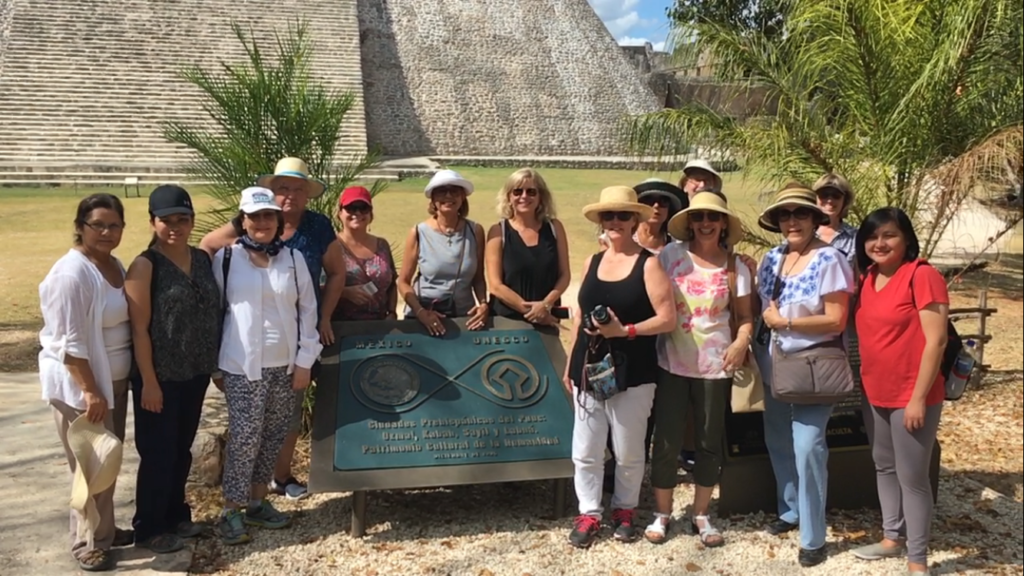 The Women’s Travel Group in Yucatan

Where should Americans feel comfortable about going in 2017? There are new factors to consider: President Trump who has been less than friendly towards NATO countries, Muslim countries and Mexico. There is the very high dollar which makes travel cheaper. There is the apparent loss of ff mile availability. There is Brexit which has shaken up the whole EU group. Finally there is the headline that makes you think you will only angry refugees on every street overseas.

Since the election, I have traveled with women’s groups to Britain, Iran, Mexico and Chile. Everywhere I hear the same questions? Do you really hate Muslims or is it just a government to government announcement? Are police arresting immigrants? Will Americans stop coming here?

To tackle Trump first, and let’s look at what happened in Tehran on election day. Everyone, and that includes hotel staff who spoke English….asked Who is this man, and the follow up statement was, “don’t you think he is just talking for headlines”. Most also added “our government does the same thing, big talkers”. “He must be smart since he is so rich”.  Absolutely no one said anything negative about The United States in Iran where our history has many bumps and issues. Whether or not we will be able to visit Iran as planned for November 2017 with our women’s group is up in the air until our new administration is in office. We believe we will still be able to go and will be welcomed even more as American companies start doing business there an hire locals.

In Mexico, we heard nothing negative at all. Most Mexicans are happy in an economy growing 4% a year. In Chile I did hear the fear that immigrants would be hunted down and imprisoned in major cities from one lady. But Chile has a dark history from Pinochet and a different take on life.

NATO countries and these include Turkey: this is where most of us do go, Europe. There is a general feeling that Russia is the bad guy, after all Russia has a strangle hold on all natural gas imported into Europe. We are the good guys! Americans are welcomed for our openness and of course, our money. Again most peopler either are not aware of Trump’s statements on making NATO countries pay more. They have their own issues to deal with like Greece. The main concern is Brexit and its effect on the Continent. And immigration which with Brexit, will keep more refugees on the Continent.

Muslim countries and tourism: many of us are avoiding the Middle East right now, except for Morocco and Israel, both very popular destinations. Other Muslim areas like Malaysia, The Stans, Iran, Emirates etc are full of Americans even those with an Israel stamp in their passports. There are more discounted and very comfortable flights on carriers like Emirates, Qatar, Etihad to the Persian Gulf and India. Walk down the street in most of these areas and people smile when you tell them you are American. You will often hear, my cousin lives in New Jersey or something like that.

The dollar is amazingly high; go NOW. A high dollar cuts the cost of flying into overseas airports, has halved all costs in Mexico where 10 Pesos to the Dollar is now 20 and enables you to eat at places that before were unaffordable or to grab more taxis when you are tired. The Pound is at an all time recent low because of Brexit, so a great meal cost me $35 over the former $60! (It was in the new restaurant at The Royal Academy) and included a glass of wine.

FF miles are evaporating as we write. Airlines are doing well, a monopoly always does. They care little for the freebie ff miles we now take for granted. Even the Chase Sapphire card which gives you 100,000 miles is being phased out.

Immigrants in Europe: There have always been street people and yes now there are many refugees in Eastern Europe in particular. You will probably not see many on streets where tourists go, but you might. Many countries are now allowing street people to loiter since it does hurt tourism and local color. In London some time ago there were 70 Romanians sleeping on a street near me; shortly they were moved by the police: not at all refugees, they were forcing the government to give them housing. Pick pocketing is a nuisance everywhere; always be careful in big cities, or crowded places. Leave your valuables home and most of your cash etc in the hotel safe.

So where should we go this year:

Mexico is a deal until oil prices rise again.

Russia if you are curious about our new ‘friend’???

Africa, in the tourist industry Africa is the new frontier for all kinds of places not yet visited.