By Anne Akers, Cause Connector 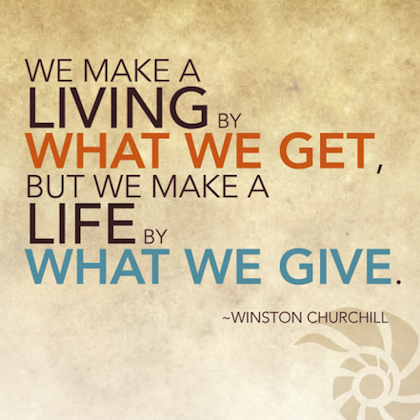 For any who have considered giving your time, resources, or just of yourself to charitable causes, this quotation most likely will resonate.  However, you may ask, “Where do I begin?”, “How do I choose a charity?”, and “Does charitable giving always imply the ability to write a check?”. Let’s take a look at each of these questions, beginning with charitable giving in America.

GIVING IS AN AMERICAN TRADITION

JFK Jr. once said, “Charity, giving voluntarily and freely, is truly a jewel of the American tradition”. Did you know, for example, that following the Depression, charitable giving in America has been on the rise. In 2014, charitable giving was estimated at $335 billion—noting that it was individuals, not corporations, who accounted for a 73% rise in total donations. (from 2011 to 2013).

On the global stage, America has also demonstrated a strong commitment to giving and is the only country to remain in the Top 10 categories of giving behavior as measured by the World Giving Index (2009 to 2013).

GIVING IS A CORE TENET IN MANY FAITHS

The instinct to give is also a cornerstone of many faiths, ranging from Christianity to Islam.  In Christianity, the Bible reminds us that “It is more blessed to give than to receive”.  And in Judaism, the Hebrew word Tsedakah (meaning righteousness, fairness and justice), suggests helping the poor and needy is considered not only a responsibility but a duty—with the ultimate goal of helping others to become self sufficient.

A sacred Hindu text teaches that the only giving that has spiritual value is that of giving without reward or recognition.  Similarly, in Buddhism, giving is viewed as an indication of a person’s humanity and considered a vital part of spiritual development.  And finally, a tenet of Islam is the idea of Zakat (that which purifies) which is  a religious tax for Muslims only, based on a percentage of one’s wealth.  Zakat is considered an obligatory alm and part of the purification process. GIVING IS A PRIVILEGE FOR ALL

“Everyone can be great.  Because everyone can serve.” Martin Luther King

Why give?  This is a personal question that probably has as many answers as there are individuals. You might say, “Because it feels good”, “I want to be an agent for change”, or perhaps this is just the way you were raised and it is the right thing to do.  Whatever your reasons, it does not matter who you are, where you come from, or the size of your bank account, each of us is uniquely qualified to “do what you can, with what you have, wherever you are”.  And in so doing, what we give blossoms many times over and the act of giving becomes a gift in and of itself.  Indeed, the opportunity to give is a privilege bestowed upon us all.

HOW DO I CHOOSE A CHARITY?

The first step is to find a cause that fits your interests, your passions, and your life experiences. For example, are you interested in women’s rights, environmental issues, funding of the arts, culture, and humanities, education, animal charities, the plight of our Veterans, etc.?  In futher pinpointing a cause of your choice, you might ask yourself the following:

Once you begin to reflect on your passions, your gratitude, and those factors that have shaped your character and world view, you will be on the way to defining your path to give back.

There are many charity websites that can be helpful in our research.  Two recommended resources are Charity Navigator (www.charitynavigator.org) and GuideStar (www.guidestar.org).

Charity Navigator is America’s largest independent charity evaluator and provides free information on the financial health and transparency of thousands of charities.  In addition, they feature highlights like the Top Ten, the most followed charities, celebrity rated, super sized, most frequently viewed, routinely in the red, etc.

All not for profit organizations are required to file a 990 form with the IRS, which provides information on operations, potential conflicts of interest, and financial accountability.  As of 2010, the Guidestar database contained over 55 million IRS 990 forms.

You may want to continue additional research regarding leadership, mission statements, programs, how much of the charity’s revenue is actually going to its programs, reputation, Board members, etc.  One way to determine this information is to talk to those involved in the charity, visit the charity website online or consider a site visit to the charity.

Lastly, now that you have completed your research, you will want to be sure that you can add value to the charity.  Do your skills match the charity? For example, is this charity looking for volunteers or are they already overstaffed.  If that is the case, you may want to look to other charities that may be a better fit.  In future articles, we will discuss Board service (pros and cons), volunteerism, how to help a charity raise money, and starting your own charity.

In conclusion, others will not remember the businesses we have created, how many vacations we took, or the designer clothes we wore.  But in the words of Albert Pike, “What we have done for ourselves alone dies with us, what we have done for others and the world, remains and is immortal”. 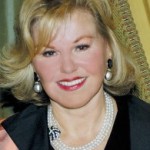 Baby Boomers, “empty nesters”, retirees, and Tomatoes, all have invaluable experiences, knowledge, stories, and “gifts to give” for the many causes that are deserving of our attention. Anne Akers is a great “cause connector”.  She has been involved in many levels of not-for-profit work for decades, including Gala Committees, board service, and much more, with an emphasis on women’s health, financial literacy, military women, and female empowerment.  In addition, you may know her as the Founder/Editor in Chief of GLOW Beauty, Health and Wellness Magazine; the Founder/Publisher of Castle Connolly Graduate Medical Publishing; co-Founder of MDPublish.com, and a private business development/marketing consultant in the aesthetic/medical field.