the World Premiere of 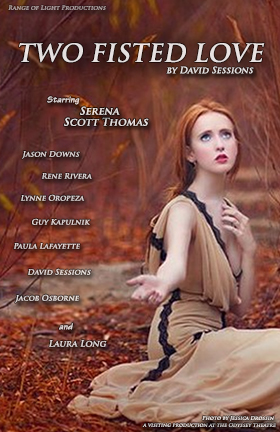 Written and Directed by David Sessions

At the Odyssey Theatre

It’s a Three Tomatoes ticket giveaway promotion for lucky Tomatoes to win 2 pairs of tickets to attend the premiere of Two Fisted Love , a dark comedy about a modern family in a state of moral crisis.

It’s 2008 and Hollywood A-Lister, Caroline Connors (Serena Scott Thomas), having recently been diagnosed with Multiple Sclerosis, braves her descent into an uncertain future while attempting to navigate her relationships with her ultra-conservative and less than politically correct husband and her defiant and idealistic daughter in this premiere of David Sessions’ dark comedy about a modern family in a state of moral crisis.

WHERE:
A visiting production of the Odyssey Theatre
2055 South Sepulveda Blvd., Los Angeles, CA 90025
Just north of Olympic Blvd. on the West side of the street.